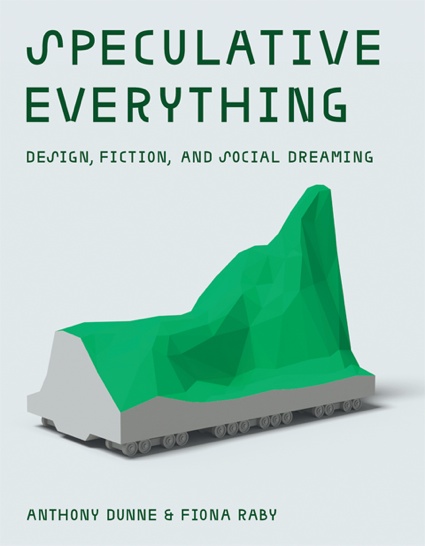 Are designers too wedded to a realist vision of today, and of tomorrow’s prospects? Are they complacent about design’s contributions to society? The answer to both is a resounding yes according to Speculative Everything: Design, Fiction, and Social Dreaming. The authors, design duo Anthony Dunne and Fiona Raby, argue that designers are interested mostly in that which can be produced and marketed under existing or too-comfortably imagined future conditions. Designers tend to think they are changing the world for the better without genuinely altering business as usual. The authors contend that design is fully in thrall to industry and today’s technological fetishism; consequently, the field is severely limited in its imaginative capacity to consider alternatives to current intellectual, social, and politico-economic conditions.

How can design break out of this tyranny of the probable, utilitarian, and techno-utopian? Dunne and Raby argue that designers must come to realize that they always deal in fiction, creating things “meeting the imaginary needs of imaginary users.” But designers too quickly repudiate or ignore this; they “are expert fictioneers in denial” (p. 88). Dunne and Raby want design to better address people as citizens with dreams and not just as consumers with wants. The method they propose to do this is speculative design, a term they prefer over other possibilities (conceptual design, critical design, interrogative design, futurescaping, etc.). Speculative design, they claim, breaks us out of the imposed, putative realism of our current neoliberal order; it provides “alternatives that loosen the ties reality has on our ability to dream” (p. 189). 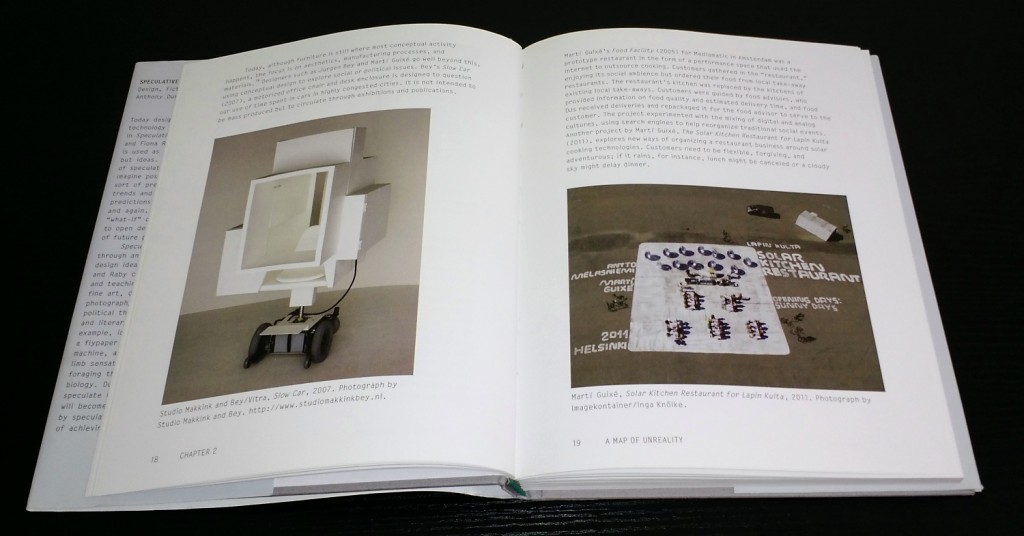 Much of the conceptual matter in this book is compelling, even if it is consistently underdeveloped. Seeking to “unsettle the present” (a phrase borrowed from philosopher Stephen R. L. Clark) rather than predict the future, Dunne and Raby propose a form of design modeled on speculative fiction combined with certain aspects of conceptual art and futurology. Their aim is lofty and seductive: to put design, construed broadly, in the service of imagining human possibilities rather than merely satisfying the needs of the moment or the predicted needs of a future state of being. Their argument, although not presented this way, should be considered part of a broader, growing discourse on “moral imagination”—a discourse that design can contribute to and learn from. Their vision has the virtue of removing design from the immediate and monetary, the short term and economistic. Issues of efficiency, practicality, innovation, and aesthetics are put aside temporarily in favor of questions about design as a forum, design as access to social imagination, design as provocation and resistance, design as ethics and criticism. These concerns are hardly unique to Dunne and Raby, but the scope of their vision, and their dedication to adopting some of fiction’s methods, is impressive. 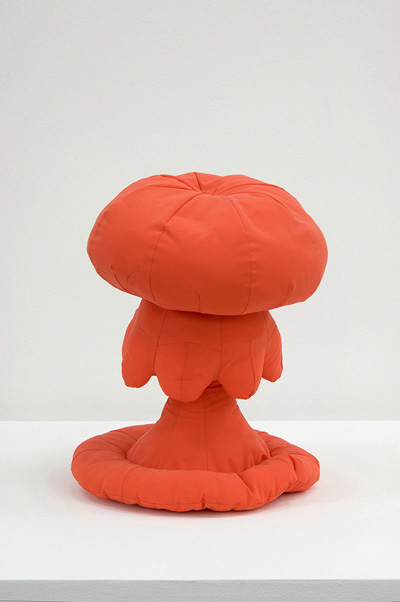 I am not, however, entirely seduced by their presentation of this vision. One of the major problems surfaces early when Dunne and Raby write,

“We believe that by speculating more, at all levels of society, and exploring alternative scenarios, reality will become more malleable” (p. 6).

The paradox of “malleable reality” comes into plain sight when, just two pages later, they quote from Zygmunt Bauman’s Liquid Modernity (2000), a devastating polemic against the radical malleability imposed upon individual lives and whole societies under the sway of neoliberal ideology. They write, after acknowledging the shrinking space of the commons, “On a more positive note, with this reduction in top-down governing, there has been a corresponding shift away from the top-down mega-utopias dreamt up by an elite; today, we strive for one million tiny utopias each dreamt up by a single person” (p. 8). But millions of utopias-of-one is not what Bauman celebrates; nor should we. The authors quickly back away from this individualism, returning to an ideal of a more collective, social, or public form of speculation. But the contradiction, which I do not think unresolvable, remains at the heart of their vision.

Two other unresolved problems become evident as one progresses through the book. These stem partly from the fact that much of the text is an exposition of often strange (sometimes really disturbing) projects rather than a systematic working out of speculative design theory. First, there is the question of where support for this speculating should come from and where it can be cultivated. Who will pay? Who will publish and exhibit it? Who will look at it and how will they learn from and apply it? Can it and should it be taught? Audience, host, sponsor, education, cultivation, distribution: all of these need to be developed more comprehensively to sustain a real culture of speculative design. It won’t do to simply assume that the “marketplace of ideas” the authors refer to will efficiently and eagerly distribute these goods. The neoliberal underpinning of such an assumption again strikes at the contradictory impulse coursing through the text. 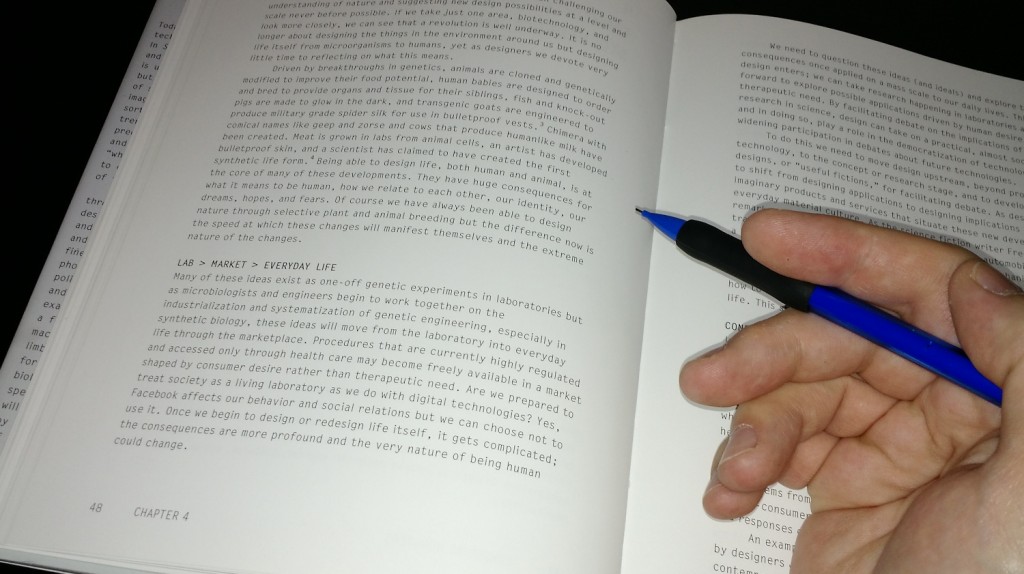 Second, the authors claim that they want to separate speculative design from both “pure art” and fiction proper, but the dividing lines are blurred, at best. Their own fascinating project, United Micro Kingdoms (2013), presented in the last section of the book, is a case in point. Commissioned by the Design Museum in London—and here one needs to consult the designers’ website for background information, as the book is consistently silent on the genesis of work it discusses—the “preapocalyptic experiment” imagines the UK as populated by communities of closed “alternative ideological systems” that Dunne and Raby call “micro-kingdoms.” Each kingdom, they imagine, “became an experimental zone free to develop its own form of governance, economy, and lifestyle. England became a deregulated laboratory for competing social, ideological, and economic models” (p. 174). (Do I need to call out the neoliberal deregulation trope here?). The project is large and multivalent: it comprises CGI, video, photographs, constructed objects, game play, and more.

United Micro Kingdoms fully illustrates Dunne and Raby’s commitment to speculation, to asking questions and encouraging imaginative thought about necessarily imperfect, extreme but not fantastical, alternatives. But as they acknowledge, the project is inspired by “the literary imagination” and is absolutely dependent on writing for explication, even if a series of made objects remain critical to the exhibition experience. Without the written description the project can make little sense. This sits uneasily with their claim that speculative design “is critical thought translated into materiality. It is about thinking through design rather than through words and using the language and structure of design to engage people” (p. 35). The balance of word and object is a real question for the speculative design paradigm. They want the object to stand on its own, but in most of the projects presented, the object is critically dependent on the word.

Although I harbor suspicions that its underlying ethos is not nearly as radical as it is presented, I think the book is useful and provocative. Dunne and Raby’s main contribution is in putting design at the service of an imaginative politics. I hope they and others of similar vision continue their research and provocations, mindful of the theoretical (and political) contradictions such an approach potentially entails.

Speculative Everything: Design, Fiction, and Social Dreaming is written by Anthony Dunne and Fiona Raby and published by MIT Press. You can support the Designer’s Review of Books by ordering this book from Amazon (US|UK|DE).