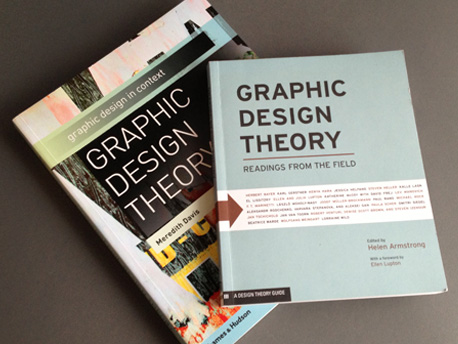 Armstrong’s book is a collection of excerpts from groundbreaking texts written by designers, such as Jan Tschichold’s The New Typography. Readers may appreciate these writings as extensions of their authors’ studio practices. Davis’ book, which separates generative theory from critical theory, often draws on texts from outside of the design field. Davis shows how concepts from Gestalt psychology, linguistics, and political philosophy,  for example, inform the ways we think about graphic design.

Helen Armstrong’s Graphic Design Theory was published in 2009 by Princeton Architectural Press. It is  part of the Design Briefs series which strives to make “affordable, beautifully designed” books that inspire “both students and seasoned practitioners who want an overview of the fundamentals of design.” Princeton Architectural Press has published 16 books in this series, often in collaboration with students and faculty  at the Maryland Institute College of Art (MICA).

Meredith Davis’ Graphic Design Theory was published in September 2012 by Thames & Hudson. It is  part of the Graphic Design in Context series, a partnership with professors at NCState and three  other institutions (Carnegie Mellon, CalArts, and The University of the Arts).

Both books are loosely organized by a similar chronology: one that begins with the industrial revolution and ends with the present day. Neither book is a history, but both refer to historical ideas in order to show how contemporary ideas evolved. Both books contain glossaries of essential vocabulary. Importantly, both books claim to be introductions to graphic design theory with the hope that readers will deepen their studies with supplementary texts.

A Deeper Look Inside:

Armstrong’s book is divided into three sections: “Creating the Field,”  “Building on Success,” and “Mapping the Future.” Each section is followed by a subsection called “Theory at Work,” a portfolio of relevant graphic design that demonstrates the theories discussed in that section. 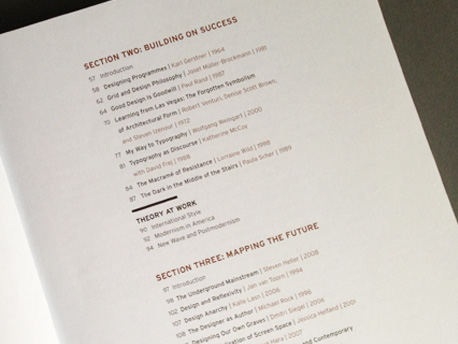 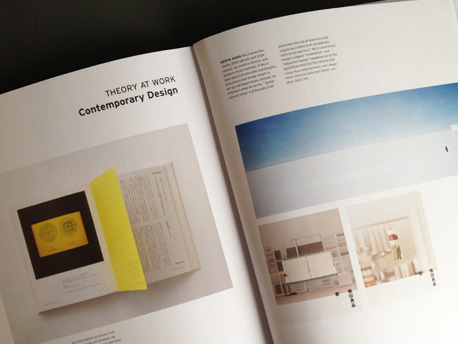 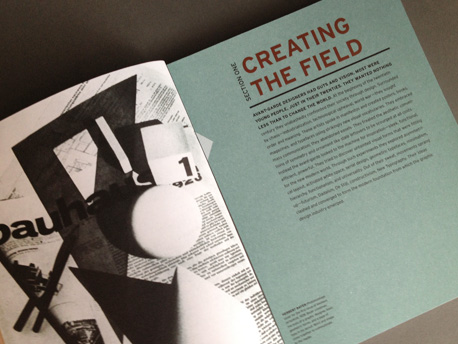 In “Creating the Field,” Armstrong includes texts such as “The Futurist Manifesto” by F.T. Marinetti and “The Crystal Goblet” by Beatrice Ward. These readings show graphic design as a developing discipline. She unfolds the story in a way that humanizes graphic design heroes:

Avant-Garde designers had guts and vision. Most were  young people, just in their twenties. They wanted nothing  less than to change the world. 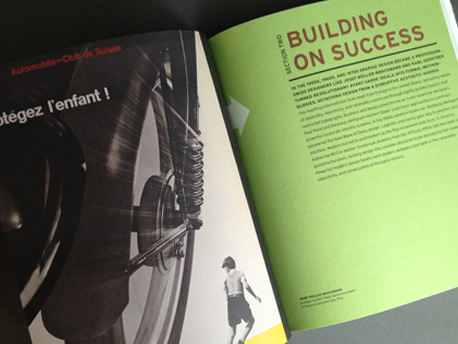 In “Building on Success,” Armstrong explains how graphic design went from a collection of radical ideas to a formalized profession. From utopian visions of objectivity with “Grid and Grid Philosophy” by Josef Müller-Brockmann to the simulated experiences of Robert Venturi’s Learning from Las Vegas, Armstrong offers readers an assortment of viewpoints from the Modernist and Post-Modernist schools of thought.

The resulting International Style leapt from Europe to the United States, spreading values of neutrality, objectivity, and rationality expressed through tightly gridded layouts and restricted typography… In the 1960s rebellion broke out. 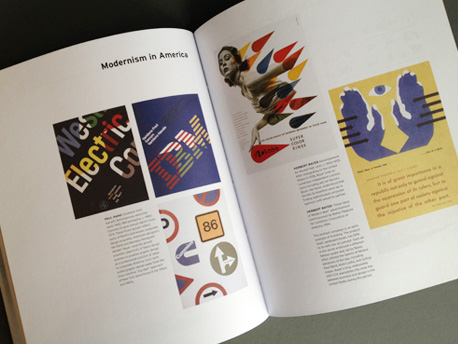 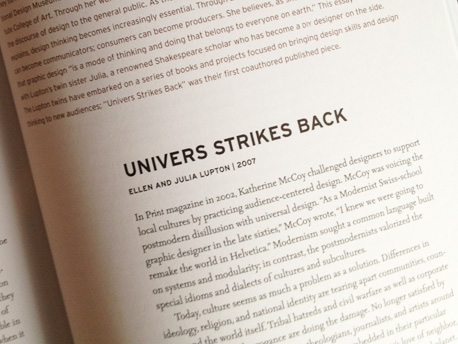 Lastly, in the final section of the book, “Mapping the Future,” Armstrong points to the future of graphic design with texts about the nature of interactivity and participatory culture. Here, readers will find   “The Designer as Author” by Michael Rock and “Designing Our Own Graves” by Dmitri Siegel. She concludes her book with an essay by Ellen and Julia Lupton, “Univers Strikes Back,” which is about the new universalism of networked individuals:

The new universality pursues not a fixed, closed totality but an open infinity. It emanates from particular situations, from individual users solving specific problems. 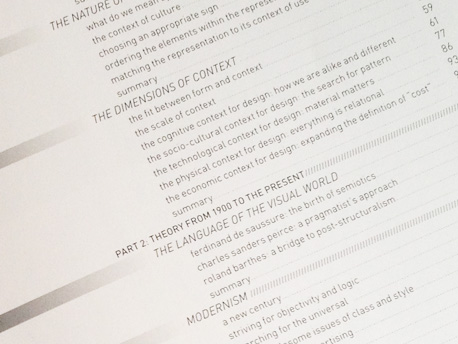 Meredith Davis’ book is divided into two parts, each with several sections. In “Part 1: Laying the Groundwork,” Davis introduces key concepts with sections titled “Communication Models,” “The Nature of Representation,” and “The Dimensions of Context.”

You are in a restaurant with a friend and are planning to go  to a movie together after dinner. You will be driving separate cars but your friend does not know how to get to the theater.  So you draw the route between the restaurant and the theater on a napkin… 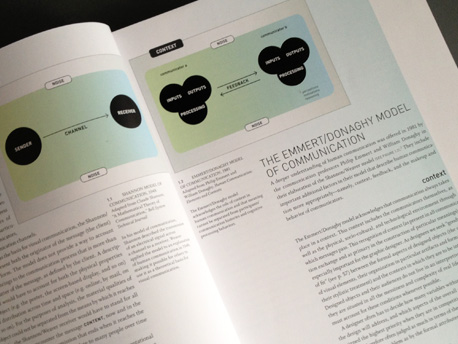 In the context section, Davis writes about the  “formative and illustrative roles for design” in society—that is, how  design shapes culture or expresses the current state of culture. Among her varied examples are Thomas Jefferson’s design of the University  of Virginia, Listerine advertisements from the 1940s–70s, and  Rem Koolhaas and Bruce Mau’s 1998 book S, M, L, XL. Davis also writes about materiality—media and tools, surfaces and structures— as elements that contribute to meaning.

The specific visual, spatial, auditory, kinesthetic, and temporal characteristics of form are content. 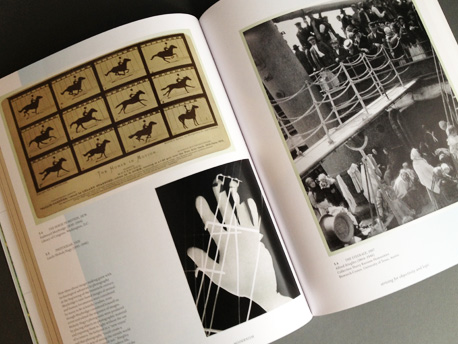 In “Part 2: Theory from 1900 to the Present,” Davis demonstrates  how foundational design concepts have been shaped and reshaped  by cultural forces and technology since the industrial revolution.  Readers begin the chapter by viewing a Lewis Hine photograph of a child laborer, Muybridge’s The Horse in Motion, and Dorothea Lange’s Migrant Mother.

The study of language holds particular significance  for graphic designers whose work involves the combination  of visual and verbal elements according to social and  cultural conventions. 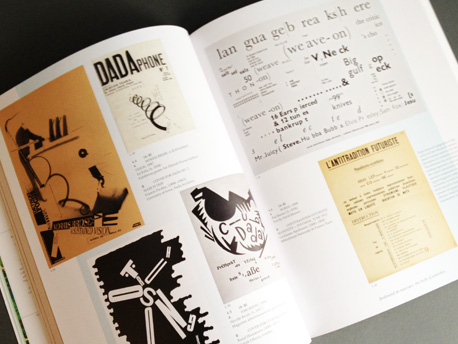 In the first section of Part 2, “The Language of the Visual World,” Davis introduces semiotic theory, the study of signs and signification, as it originated with Ferdinand de Saussure and Charles Peirce. This section includes concepts such as langue and parole, vernacular form, taxonomies of signs, pictogrammatic systems, and lastly, myth, as it was defined by the French literary critic Roland Barthes.

Any discussion about the history of design involves the question of perspective. Should we follow an art-historical canon, working from the idea of connoisseurship to  highlight exemplary objects and their famous makers?  Or should we privilege other critical filters that place  the interpretation of design theory in larger social,  technological, and economic contexts? 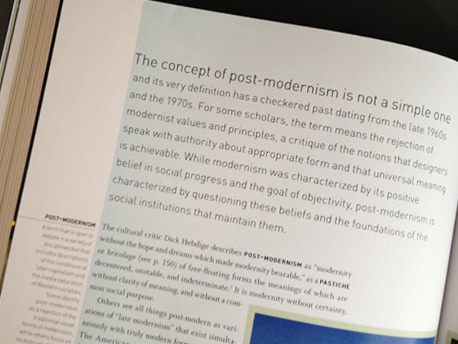 In the sections called “Modernism” and “Post-Modernism,” Davis, like Armstrong, devotes attention to design’s trend towards objectivity and universalism and its consequent transition into vernacular appropriation and its obsession with authorship. But Davis frames her history lesson in terms of world events. For example, she describes how industrialism, with its flux of immigrant workers and simultaneous production of consumer goods, resulted in an early Modernist ethos:

Out of these circumstances arose new missions for design: the growth of advertising to support a burgeoning world of goods and new lifestyles; searches for the appropriate expression of a new age and form that transcended specific cultural experiences; and a social conscience that viewed design as capable of building a utopian future…”

Davis favors an approach to design history that frames it within the context of technology and culture rather than the commonly used method of presenting a “sequence of discrete object styles” or “the products of individual genius.”

Davis ends her section on Post-Modernism with an introduction to the notion of hyperreality. While Armstrong’s inclusion of an excerpt from Venturi’s Learning from Las Vegas implies these lessons, Davis presents the reader with ideas that refer to the primary sources of these theories, namely the work of Umberto Eco, an Italian semiotician, and Jean Baudrillard a French philosopher and sociologist. 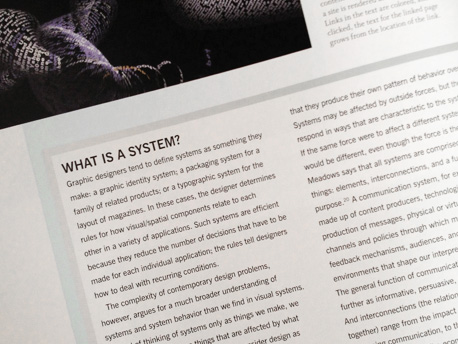 Lastly, in a section called “A New Paradigm,” Davis shares theories that discuss the effect of new media on design and culture. Both Davis and Armstrong, in her own way, recast users of design as participants of design—a shift that connotes the changing relationship between designers and audiences.

Davis reaches for insights from Marshall McLuhan. His text, The Medium is the Massage, was a prescient look at the nature of communications media and its influence on culture. Armstrong draws on contemporary designers—Dmitri Siegel, Jessica Helfand, and Kenya Hara, among others—whose essays, one could argue, build on McLuhan’s ideas.

Unique to Davis’ text is her focus on systems. Davis lays out the importance of “systems thinking,” over “object thinking,” as the future of design. She also takes care to define what systems are:

Graphic designers tend to define systems as something they make… The complexity of contemporary design problems, however, argues for a much broader understanding of systems and system behavior than we find in visual systems. Instead of thinking of systems only as things, we need to think of them as things that are affected by what we make. 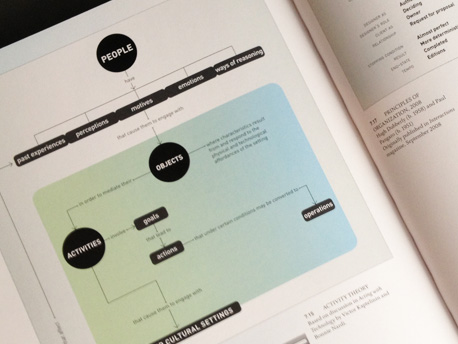 Since Davis’ book opens with diagrams for communications models, it is fitting that she moves to close it by sharing diagrams for experience models. This builds on her enthusiasm for systems thinking and segues into a discussion on service design, interactivity, and design research (including ethnographic research).

Under an object-centered, mechanical definition of design practice, the designer is seen as an expert who decides  on the attributes of a finished product which is delivered  to management to solve a problem. Under an organic,  systems-oriented definition of practice, opportunities and insights emerge from anywhere within the organization or system. The designer steps into this context as a facilitator  who builds consensus around ideas that evolve under  changing conditions.

Where is design headed?

One can infer from the selections in Armstrong’s text, that she sees design becoming more democratized. Designers are making the tools and templates that arm non-designers with the ability to make design. Everyone in the future will be, at least in part, a designer. This frees professional designers to take on more challenging, perhaps even activist, roles in society.

According to Meredith Davis, it seems that graphic design will continue to be systems-oriented rather than object-oriented which  is to say that designers will be more occupied by ideas than artifacts.  As such, graphic design will become increasingly interdisciplinary.

As a profession, the contemporary practice of graphic design shows all the requisite behaviors of more mature fields. It  has a documented history, standards of fair practice, interest  in methodology, and the beginnings of a research culture.  As a discipline, however, graphic design—or whatever name we assign to its contemporary iteration—is still exploring the extent of its domain.

Which book is right for you?

To paraphrase Davis, there is no single, unified theory of design. Armstrong’s book may rest well with the casual design reader or the young student because it is an introduction to theory by way of light historical reference and contemporary discourse. Armstrong’s book may be a good first dip into theory, while Davis’ book is more of a lap-after-lap swim.

Davis’ book is densely packed with influential concepts. It is a product of her own scholarship as she is an erudite researcher. Her Graphic Design Theory may be over the head of the casual reader and will certainly challenge a young student. For the committed practitioner and the advanced design student, Davis’ book is a treasury of thought that presents the reader with a wide range of names and titles to underline in search of more knowledge.

In short, there is a place for both books on the serious graphic designer’s shelf. The two may function well as companion texts.

Graphic Design Theory: Readings from the Field is published by Princeton Architectural Press and is available at Amazon.com (US | UK).