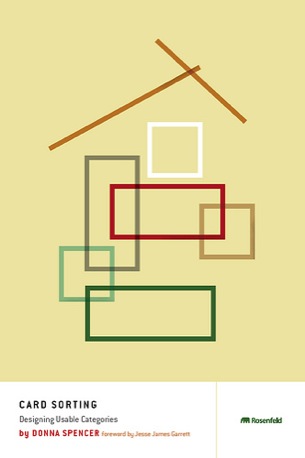 Some information architecture books take a general approach and cover a large range of topics in a single book. These books serve an important purpose of explaining what information architecture is, best practice principles, and how to communicate designs. Because they cover a broad range of topics they can only go into so much detail, and in the nuts and bolts of a project can leave you with unanswered questions.

Card sorting is one of a range of techniques (including interviews, surveys, and search term analysis) that can be used to give insights about how people group information, and what language people use to think about these groups. Rather than writing a more general guide that covers the broader topic of categorisation, Donna focuses entirely on the technique of card sorting.

The basic process behind card sorting is straightforward: you create a set of cards that represent content to be organised and have a range of different people (either one-on-one or as a group) sort the cards into logical groups. 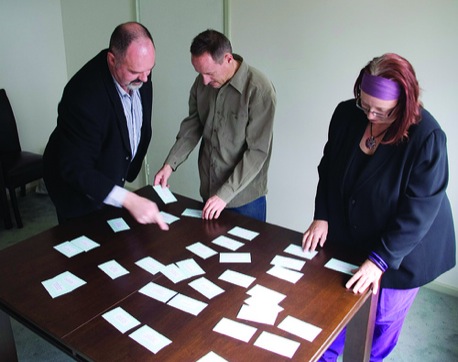 After a few introductory chapters on the theory and benefits of card sorting the remaining chapters are structured by the various steps that are involved in a card sort from the start to finish.

Four chapters cover the details of preparing for a card sort, with chapters like “Choose the Method”, “Choose the Content”, “Choose the People”, and “Make the Cards” it’s clear that this is a very hands on book.

Chapters are short, but do a good job of describing what you need to know. For instance, the “Choose the Method” chapter is only 9 pages (including a half page summary) but walks you though choosing between open versus closed card sorts, team versus individual sorting, and in-person versus software methods.

One of the most valuable chapters for people will be the chapter that looks at how to choose the content that is covered in a card sort. The first card sort I organised was for the content on an airline website, which in retrospect was a huge failure. Nearly all of the problems that I encountered in my early experience with card sorting would have been avoided if I’d had access to this one chapter alone. It covers topics about how to choose representative content from a site with potentially thousands of pages, how to deal with representing a mix of content and functionality on a website, and tips on labelling your cards that will avoid leading people into forming specific groups. 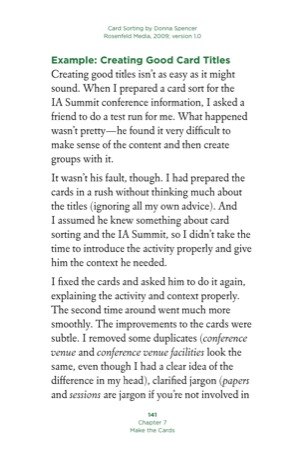 The stage that comes to mind when people think of card sorting - where participants actually form the groups - is covered in a single chapter (Managing the Sort). This is the most fascinating part of the process because you find that different people have quite unique ways that they think about content - even in areas that you might assume would form obvious groups. I once worked with a colleague who felt that this is where the true value of card sorting is and you don’t need to go any further.

Donna and my colleague don’t share the same view, and the next four chapters describe further steps that can happen after the act of grouping the cards is over. These chapters cover analysis of data collected from card sorts and briefly how to document the card sort in a report.

For most people, this book covers all the practical knowledge you’ll ever need to know about preparing, coordinating and analysing card sorts. 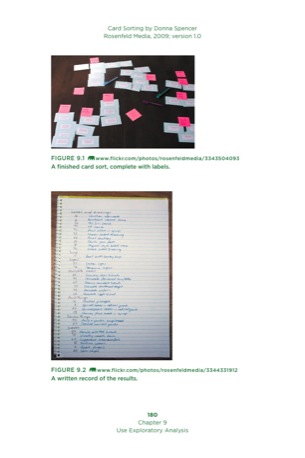 But, at less than 200 pages, don’t expect this to be an exhaustive resource.

For example, the theory of card sorting is only briefly covered in an introductory chapter (but references are included for further reading) and when it comes to the analysis of results, statistical methods are only given a cursory review – instead Donna describes how to use a spreadsheet-based technique that she has refined over various projects. (This spreadsheet and instructions for use are also available as a free download.)

Rather than seeing the brevity of these topics as an oversight I see it as a merit since it prevents the book from becoming bloated and overwhelming.

Some of the ideas in Card Sorting can be found in various blog posts Donna has written on both her own blog, and also at Boxes and Arrows. While these posts introduce aspects of card sorting, the book excels in providing a complete picture of the card sorting process from start to finish. 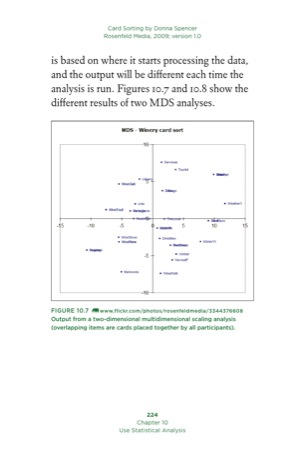 Donna’s writing style is down to earth, confident, and refreshingly jargon free. As well as being useful for design practitioners, it could also be accessible to project stakeholders or clients.

Like other books published by Rosenfeld Media the page layouts are crisp, there is an accompanying website for the book, most of the book illustrations are available on Flickr for use with a Creative Commons license, and the cover is a beautiful minimalist design from The Heads of State.

Card Sorting is a great book if you are interested in running a card sort on your next project but you’re hesitant either because you’re unfamiliar or have had a bad experience with card sorting in the past. It really is a fail-proof recipe.

If you consider yourself experienced at card sorting, don’t expect to find anything groundbreaking. But that doesn’t mean there won’t be something new to takeaway. For me, Card Sorting convinced me to rethink group card sorts, which I had previously thought of as pretty much pointless. At the very least, it’s great to be able to reference a real book to back you up if you’ve got questions from a doubtful stakeholder.

An important point that Donna raises is that card sorting is only a tool, and while it can help find a solution, it’s by no means a substitute for thinking:

‘Remember that you are the one who is doing the thinking, not the technique. You are smart and experienced and allowed to have good ideas–card sorting (and other techniques) is an aid to provide insights and help you create great solutions. But you are the one who puts it all together into a great solution. Follow your instincts, take some risks, and try new approaches.’

And while card sorting as a technique won’t give you magic answers without some effort, the book will give you a robust method to help understand how your users think and ultimately design better systems.

Card Sorting: Designing Usable Interfaces by Donna Spencer is published by Rosenfeld Media. The Designer’s Review of Books readers can use the code DROB for a 15% discount from the Rosenfeld Media store.

Mathew Sanders is freelance interaction designer living in beautiful New Zealand, who also happens to be a fan of card sorting.