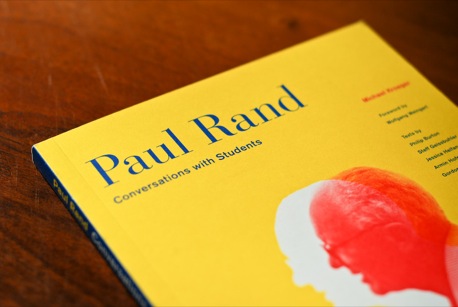 What would Paul Rand have been like as a teacher? He was renowned for his stinging critiques ornery manner, yet in Paul Rand: Conversations with Students (Amazon: US

|DE) Philip Burton chooses the word ‘compassionate’ to describe him. It seems that almost all of Rand’s students have praise for his brutal honesty and integrity. As painful as it might have been to receive those lessons at the time, they came from Rand’s heartfelt desire to pass on what he had learned in the clearest way possible.

This slim, 80-page book is part of a series in which Rand is the only graphic designer (the others are architects) and is the kind of book you can read on a short journey. The text comprises two transcriptions of Rand’s talks at Arizona State University in 1995 along with recollections from some of the students and faculty members. This is spaced apart by full-page quotes and photographs of the work Rand is discussing or photographs of him in action. 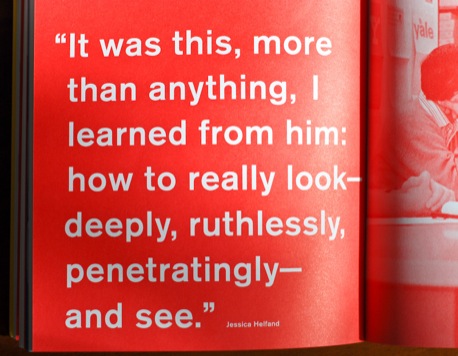 by or about him that are much more in-depth. To a certain extent, I agree, but I also think this misses some of the purpose and magic of this little book. An edited monograph or biography lacks the immediacy of the thought process. It is usually carefully crafted and re-worked. In Conversations with Students we get to witness Rand at the ripe old age of 81 sharp as a tack and take in some of the flavour of being taught by him.

In the first conversation Rand takes two of the ASU faculty members (Michael Kroeger – the book’s Editor – and Mookesh Patel) to task over some of their teaching exercises and definition of design. There are no students present at this point and Rand toys with the pair of them: 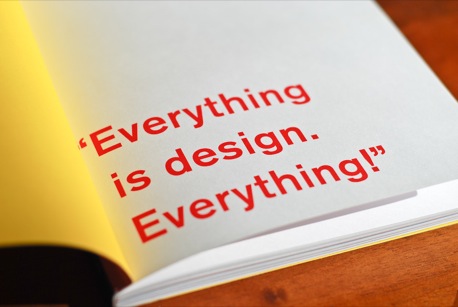 A moment later he exclaims, “Everything is design. Everything!” to which Kroeger then asks how to decide between good and bad design. Rand’s answer is simply, “You ask questions that are not answerable.”

Of course Rand does have a definition of design, but his Socratic approach leads Kroeger and Patel down plenty of blind alleys in order for them to come to one. “Design is relationships. Design is a relationship between form and content,” he relents.

Although Rand concludes the first conversation with, “you will not get [a definition of design] in a book,” the second conversation with the students sees him stressing the importance of being well-informed. He recommends Dewey’s Art as Experience

, even though he suspects everyone will “want to put it down and forget about it” after first sentence. Dewey’s analysis of aesthetics, Rand argues, is the centre of design because they are the same thing – the study of relationships. 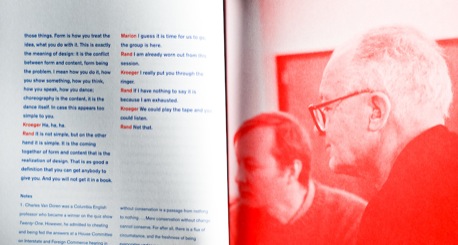 The conversation turns to the use of computers in design. Here is where Rand’s views feel a little dated and made me feel a little sad when he mentions using “the Quark”. Working with the computer can be distraction and can be too fast. So fast that you don’t get the time to brew an idea and think about it as you work. Tomato’s John Warwicker once said a similar thing to me, that he enjoyed the days when computers were slower because he could think about what he was doing whilst the Photoshop progress bar locked him out of any other actions. 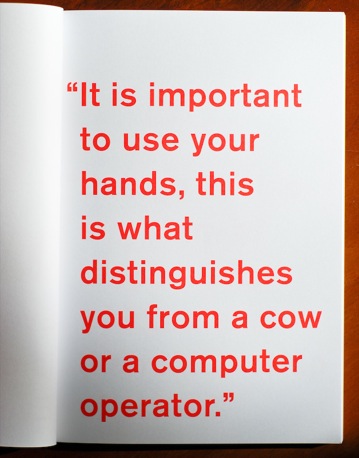 “It is important to use your hands. That is what distinguishes you from a cow or a computer operator.”

Working with your hands is important, whether wireframing and rough sketching with pen and paper or building circuits. But computers are an inevitable part of working as a modern designer and it is a shame that Rand’s brilliant mind isn’t still with us. It would have been an interesting conversation to see what he would make of the last 15 years.

Conversations with Students is never going to replace Rand’s more complete and complex books, but as an insight into his character and manner. There is more here to please than to sadden.

If this review was helpful, you can support The Designer’s Review of Books by buying Paul Rand: Conversations with Students from Amazon (US