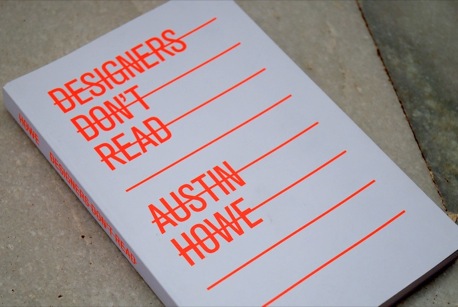 just to be contrary. I read a great deal, as you might imagine writing these reviews. Indeed, one of the main reasons for starting The Designer’s Review of Books was a complaint about the paucity of writing in many design books. Howe is a Creative Director and “design advocate”, but most importantly he is a writer. So, I had high hopes for the book, not all of which were dashed, but a few worries about the title were confirmed.

The material in Designers Don’t Read started life as a series of essays sent out as weekly e-mails to some of Howe’s favourite designers scattered across the USA. These mails were forwarded onto other designers and forwarded on again. As such, the book is divided into a number of very short chapters ranging from a single page to three or four and has the style of a well-written blog (in fact, I wondered why this wasn’t a blog instead of a collection of e-mailed essays). 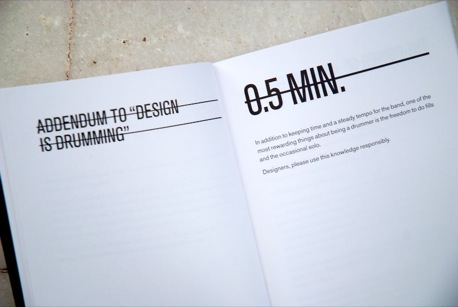 Somewhat wittily, Howe has given each chapter a reading time allocation – Every Design Firm Sounds Exactly the Same is a three minute read, for example. The longest chapter weighs in at nine and a half minutes (Concept Development: Some Different Approaches that Work). The shortest, such as Sometimes the Most Inspiring Thing You Can Say Is Nothing and The End, require just thirty seconds. You can read any chapter quicker than you can drink a coffee. So, no excuses.

The premise behind this approach, according to Howe, is that most good designers are busy “and, with a few notable exceptions, they tend to be more visually oriented and more inspired by imagery than they are by words.” This is where the book needs to be placed in context. When Howe speaks of designers, it seems to be a view of the profession narrowly defined to graphic designers within an agency context. Howe moved across from advertising to design and he cares, deeply, about the divisions between those worlds and trying to “bring together the collective strengths of the different creative disciplines”. Fine fightin’ words, but one wonders how far that bringing together can go with such a narrow focus.

Maybe it is my own background in less traditional design areas such as interaction and service design – areas that tend towards cross-disciplinary approaches. Or maybe I just don’t care enough about ad agency life and selling people stuff they don’t need, but I found it hard to gain much in the way of insights. There is nothing bad or wrong about what he writes, it’s just not as insightful as I had hoped. Howe foreshadows the reason when describing the enthusiastic response to his e-mails in the opening chapter:

“It wasn’t that I was sharing a lot of new concepts, either. Many of my readers had already studied or experienced many of the topics I was writing about – some in much greater depth than I had. But now, a few years into their careers, I think what they appreciated was a fresh, relevant context for those things, from someone who was not speaking as a a design critic or (importantly) as a designer, but as a writer and creative director with an appreciation for–and a point of view about–design.”

And therein lies a paradox. For a designer who does read, the book is an entertaining read, but is not going to add a lot to your store of knowledge. For designers who don’t read, there’s plenty of pithy anecdotes to inspire, but then they are not going to be reading it anyway. (If you’re one of those, what are you doing reading this?). If, by some chance, you fall in the middle and have not taken time to reflect on your discipline for a while, then read this book. 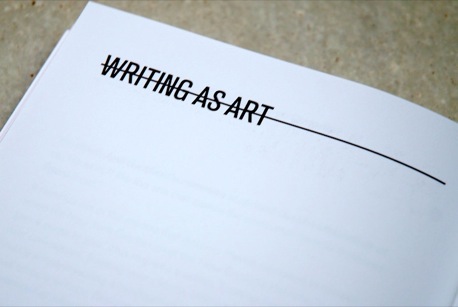 There is a much more important lesson to take home from Howe’s book. It is not that designers don’t read enough (although that is probably true), but that designers should write more. My guess is that Howe gained a great deal more from the process of writing his e-mail essays than those reading them – and I don’t mean that as a criticism. His love for writing, for thinking creatively with words, words often coupled with visuals, is clear and present. The Writing As Art chapter, which also lists some of Howe’s favourite writers, and the self-reflective moments are the most engaging as are the (ironically) visual jokes in the appendices.

Over my own years of writing, I have learned a great deal more about the creative process as a designer than I have through designing. Writing is a stripped down process and it is hard to cheat. There are no cool filters, no 3D tricks or flashy new technologies to cover up the words. Words are words whether they are scratched in the dirt or written on a computer. It is like designing with a limited palette that has millions of possible combinations. As treatise for designers on how to write, Designers Don’t Read is a good place to start. 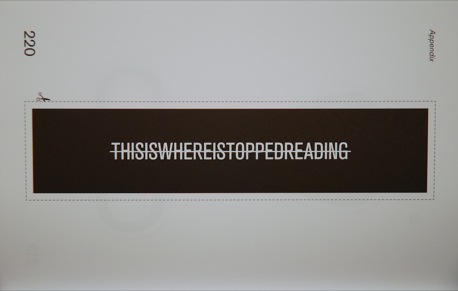 You can buy it from Amazon (US