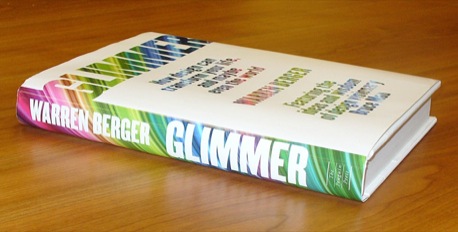 The further I’ve progressed in my career as designer, the harder it’s become to share with others exactly what I do.

First, I managed layout at a magazine and bootstrapped a few websites in thrilling Adobe PageMill. Then, within a design studio, I was responsible for creating brands and annual reports—with little to no formal training to the otherwise. Add in a number of years in advertising and marketing, leaven it with a few more of user research and wireframing, and set to “Puree”. When I try to describe to my family what I do nowadays as an interaction designer, the confusion level continues to increase.

Now I don’t need to try and explain anymore. I can just send them a copy of Warren Berger’s extraordinarily well-written book, Glimmer: How Design Can Transform Your Life, Your Business, and Maybe Even the World (Amazon: US

This is the first book about the process of design as it’s practiced at its highest levels in our profession, written by an expert journalist for the layperson, that describes exactly how designers think about and view the world. It is the product of hundreds of interviews with today’s top designers, across all major disciplines of design, cross-referenced with deep reading into the texts that have informed the growth of our profession, then distilled into plain English that anyone can easily understand. Along the way, stories regarding OXO Good Grips, the One Laptop Per Child program, the Truth anti-smoking campaign, Bruce Mau’s Massive Change exhibit, Architecture for Humanity, Proctor & Gamble, TOMS Shoes, and many others are woven through the narrative, illustrating key points regarding design concepts, principles, and sustainability practices with illustrations and sketches. It also includes a good number of everyday people who came to the design profession late in life, after they had their first “glimmer” moment.

Berger’s goal for Glimmer, put forward in the introduction to the book, states it plain:

“…design is applicable to just about any challenge—and its principles are accessible to anyone. If we can gain a better understanding of the ways designers think and work, it may enable us to do what designers tend to do so well: to recognize that glimmer of potential around us and within us, and to build on those nascent possibilities as we set out fo design a better business or a better life.”

This book is jam-packed with strong material, so I’ll focus on a few key passages that piqued my attention.

What is design, really?

The book is structured around a series of principles that Berger drew from his interviews, as well as Bruce Mau’s An Incomplete Manifesto for Growth. (Bruce Mau is called out on the cover as a major contributor, and wrote a series of brief essays that are woven through the text.) 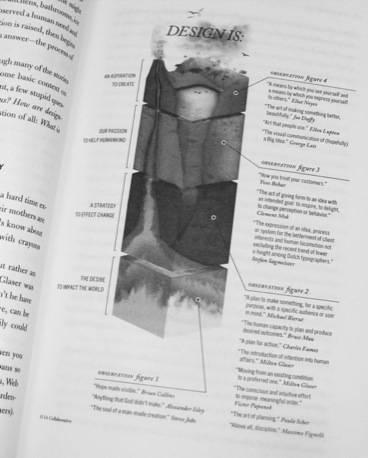 The first principle, “Ask stupid questions,” is put to great effect in Berger applying his principles to the process he used in crafting the book, right down to asking the following stupid question: “What is design?” As Berger puts it, “the problem is not a lack of good working definitions, but rather an overabundance of them.”

We are also swimming upstream, against the more conventional definition of design as a function of visual and aesthetic appeal:

“In the business world, the word design has been almost synonymous with style. Until recently, designers were tasked with making products look better and creating eye-catching packaging and communications… But the problem, at least in the minds of some designers, was that ‘style’ became a kind of ghetto for them.”

Berger then shares thinking from Donald Norman, Tim Brown from IDEO, and other design luminaries that counter folk wisdom about design as a discretely visual practice. It’s refreshing to see a writer call out on the carpet how we spend so much time describing the shape of our elephant-sized profession, rather than aiming for a shared understanding of what universal attributes inform our working methods.

Berger’s second principle is, “Jump fences.” When we are told that a problem has been unsolved, or seems impossible, our first thought should be, “Why?” After asking stupid questions, we can begin to formulate better answers. The more we live through this process, the more likely we are to succeed. 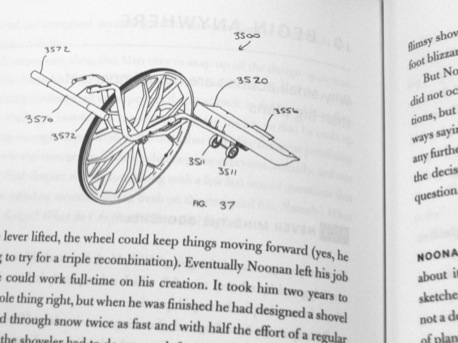 Roger Martin, dean of the Rotman School of Management, calls this the upward spiral of solving problems, “wherein the more you do it, the more you can do it”:

“An experienced designer will look at an ‘impossible’ problem and his/her reaction… ‘will be, “Ah, I know this game. I’ve been in this situation before. It’s fine if there are no existing good answers out there, because my job is to design a better answer.” And they proceed with confidence from there.'”

But Martin also calls out here that a fundamental attribute of providing better answers is in embracing ambiguity and complexity:

“Most of us, Martin notes, try to simplify problems and make clear-cut choices; we strive to construct a single, clear ‘mental model’ when we’re thinking about a challenge and trying to envision changes and solutions. But a designer… is comfortable holding conflicting ideas in his/her head at the same time. ‘The designer lets a lot of different models float around in the mind at the same time. And they select parts and pieces from those existing models to create new and better models.'”

This gift of jumping fences—which allows us to provide insight through what John Thackara calls “smart recombinations”—is the most crucial tool in the designer’s arsenal.

One of my favorite passages in Glimmer regards how we, as designers, are asked to regularly describe what makes up a designed experience – the sum of all the interactions a person has with a company’s products, services, marketing, and so forth. After describing the Compelling Experience Framework, an in-depth research study took on by Doblin Inc. to attempt to describe the stages of a consumer experience, Berger shifts to a discussion he had with the designer Brian Collins, who avoids comlex-looking charts and graphs in describing how to envision a compelling experience:

“Just imagine yourself back in [the 1700s], sailing in a Spanish galleon on the Caribbean… you look out and notice another ship in the distance. When you peer through the microscope to get a better look at that ship, you see a flag flying. As it gets closer, you can make out what’s on the flag – a skull and crossbones. As soon as you see that symbol, you know exactly what kind of an experience is in store for you… [the pirate flag] was a brand promise… and the promise was: You’re f****d.” 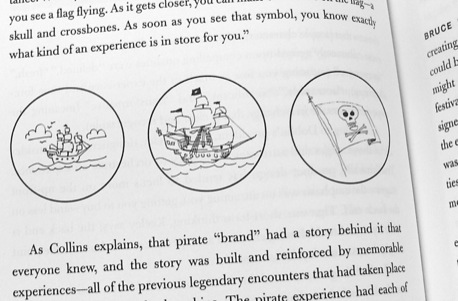 We can spend an inordinate amount of time describing what kind of experiences we want to design, but the actual impact of those experiences leads to how brands are actually manifested in the world. That is where they gain substance and meaning over time. We could call this: Less talk, more wow.

Another key point in Glimmer that was quite potent was a section entitled “How to remain ‘stupid’ forever.”

It’s become a truism that in order to succeed in a design capacity, you need to be a T-shaped person. In Fast Company a few years ago, Tim Brown said that T-shaped people have

“a principal skill that describes the vertical leg of the T — they’re mechanical engineers or industrial designers. But they are so empathetic that they can branch out into other skills, such as anthropology, and do them as well. They are able to explore insights from many different perspectives and recognize patterns of behavior that point to a universal human need.” 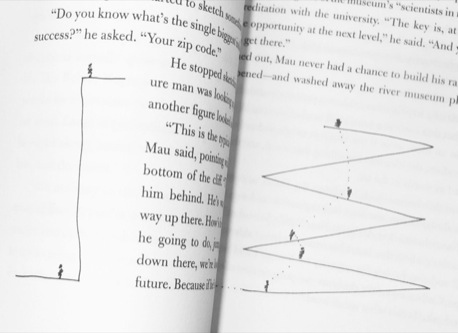 In Glimmer, discussions with Bruce Mau yielded this new analogy for the T-shaped life:

“The answer, Mau suggests, is to intentionally and constantly ‘…keep moving away from what you know.’ People tend to design their lives and careers so that they are usually on firm, familiar turf, intellectually speaking; they go with what they know… Mau, and many other designers, opt to go wide as well as deep… this is what makes designers T-shaped in their knowledge, though over time, their knowledge base becomes more like a series of T’s linked together.”

John Maeda concurs with this point of view, which for many designers is a struggle:

“It was the kind of thing where you start to wonder, ‘Am I an idiot. What’s going on?'… But [one of my teachers in Japan] explained that when you get older, the beauty of the ‘broad’ method is that you’ve built this great, grand, symmetrical heap, kind of like Mount Fuji, that is solid and cannot be moved. Whereas in the Western approach, the one thing you’ve made keeps going up and up, but it’s thin and fragile, and if one thing is wrong, the whole hill falls over.” 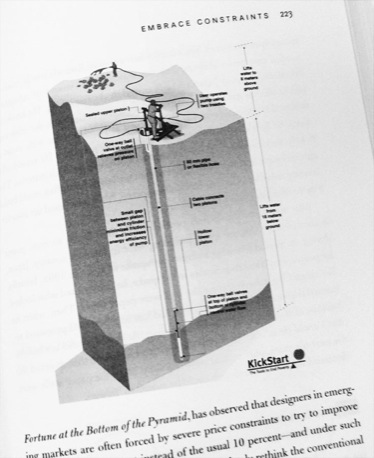 I wish this book had existed when I graduated from college, as it would have helped me rationalize my curiosity.

These are just a few moments from Glimmer. I could write a book paraphrasing this book, and will now restrain myself from doing so.

Since so many different perspectives are shared throughout Glimmer, I could see everyone from design students to seasoned professionals learning something new by reviewing this book. As a practical philosophy for the role of design within and outside the confines of its oft-corporate context, Glimmer taps into the primary vein of where our profession is now, and where it’s heading in the future. Now go read it.

You can buy Glimmer: How Design Can Transform Your Life, Your Business, and Maybe Even the World from Amazon (US

) or The Designer’s Review of Books store.

David Sherwin is Senior Interaction Designer at frog design in Seattle and maintains the blog ChangeOrder: Business + Process of Design. His first book, on coming up with better design ideas faster, will be released by HOW Design Press in November 2010.