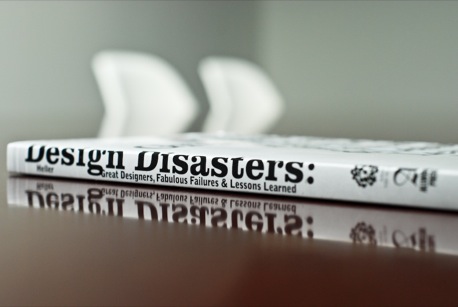 Disasters. We’ve all had them. The wonderful Fail Blog is a daily source of distraction and cautionary tales of idiocy. The #fail Twitter tag turns up a treasure trove of frustrations, usually with bad design or decisions.

I once made a phone number typos on a 20,000 flyer run that went through the letterboxes of everyone in my neighbourhood. And whilst I didn’t kill anybody, the old lady whose number I had inadvertently used was not amused despite the bouquet of apology flowers.

It is easy to imagine that the big names in design whose successes we admire have seldom experienced failure. But Design Disasters: Great Designers, Fabulous Failure, and Lessons Learned (Amazon: US

) is an engaging record of misfortune and misadventure. 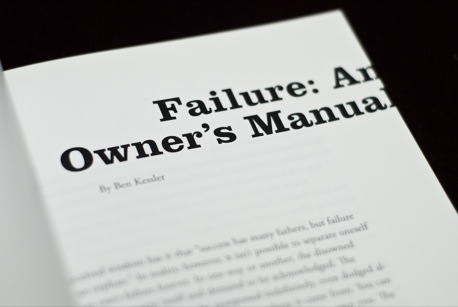 Edited by the prodigious Steven Heller, a self-professed connoisseur of failure, the book is a selection of short (four paragraphs in the case of Stefan Sagmeister) reminiscences and commentaries on failure in design. Most of all, it is a celebration of failure in design:

‘Learning to learn from failure is not instinctive. It takes intestinal fortitude not to be devastated by failure and then real-searching to find the proverbial silver lining,’ writes Heller.

It is divided into four sections: Learning From Failure, The Language of Failure, Succeeding from Failure and The Objects of Failure.

Core77’s Allan Chochinov kicks of with a witty series of iterations – honing and tweaking the same paragraph before returning to the original. It is the only essay that deliberately plays with the textual form (apart from the deliberate cut-off titles), but within it is a potent kernel of truth, particularly for those teaching design:

‘For all the talk of the value of learning through failure, it is difficult to get the concept across if we continue to use the word ‘failure’ in that sentence. People have a natural aversion to the term, and it is next to impossible to reclaim it for pedagogic purposes.’ 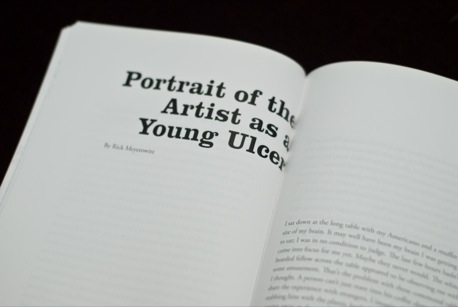 Some essays, such as Rik Meyerowitz’s Portrait of the Artist as a Young Ulcer in which he recounts the tale of a nightmare client and Ben Kessler’s Failure: An Owner’s Manual, focus on the messy reality of designing for a living:

‘Designers who strive for success should prepare themselves for the challenges of doing creative work in the middle of an endless, polyglot failure party,’ writes Kessler.

Sagmeister takes the blames his own lack of better judgment in his small, but very amusing anecdote of Deathdrome. A Video Game Package. His brutal self-assessment and honesty is a lesson to any of us with a tendency towards ego caressing:

‘I made the mistake of accepting a job I had no interest in. My first presentation with the client was somewhat below mediocre – I made another mistake and showed several possibilities – and it went downhill downhill from there – with enough people, money, and meetings involved, we managed to quickly pass awful and moronic to end up with the remarkably pure piece of shit you see attached.’ 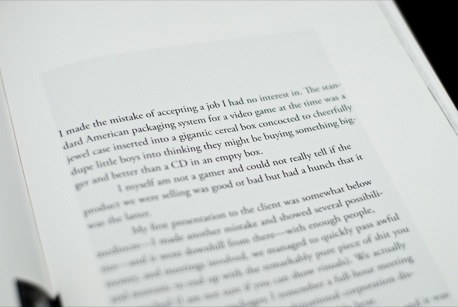 Naturally, many of the essays explore the idea of failure as a necessary component to and virtue of design. Iterations and prototypes are all designed for failure to some extent, for this is the design process. Ralph Caplan in Stumbling is the Cost of Doing Business points to the rows of pop psychology books and observes,

‘Someone is bound to say, or to have already said, that failure is the new success. They won’t be far wrong. You can’t learn from your mistakes without making some. That self-evident dictum applies to life generally but is particularly applicable to professions that traffic in discovery.’

Others, such as Richard Saul Wurman’s Hailing, Failing, and Still Sailing: Proper management of failure breeds success argue that it is not failing that counts, but how you fail and proffers some comforting anecdotes from history:

‘Great achievements have been built on foundations of inadequacy and error. The discovery of America was made when Christoper Columbus took a wrong turn en route (he thought) to the East Indies. Charles Goodyear bungled an experiment and discovered vulcanized rubber. Sir Isaac Newton failed geometry, and Albert Einstein lacked an aptitude for Math. Paul Gauguin was a failed stockbroker, and Alfred Butts invented the game of Scrabble® after he lost his job as an architect during the Depression. Robert Redford wanted to be a painter.’

Whilst Design Disasters is somewhat consoling, you get the message pretty early on: Failure can be positive, failure can have a silver lining, failure is part of iterative design process, failure is part of life. Yet this feels somewhat unsatisfying too. There is little to take away from this about how to deal with the really negative side of failure, how damaging the sense of failure can be, especially within a team and how failure can genuinely be an awful thing with absolutely no silver lining.

There are also precious few images from the authors illustrating their failures. The ever-ballsy Sagmeister being the only one to cough up a truly shameful piece of artwork. It is perhaps predictable that this should be the case, but weakened the strength of the fail tonic for me. Still, it is an easy read and a light at the end of the tunnel of failure if you have just had your project canned.

You can buy Design Disasters: Great Designers, Fabulous Failure, and Lessons Learned from Amazon (US

) or The Designer’s Review of Books store.