The Rhetoric of Modernism: Le Corbusier as a Lecturer 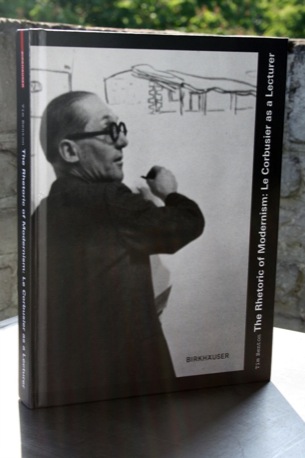 ‘You only have to see his notes to feel the emotion of the speaker. It is evident that this kind of discourse, even if expressed only in the intimacy of his notebook on the train, reveals a therapeutic aspect of the lecture for someone like Le Corbusier. His life was a roller coaster between peaks of fame and harsh setbacks, all of which he felt bitterly.’ – Tim Benton, The Rhetoric of Modernism: Le Corbusier as a Lecturer

Unlike extemporaneous speeches, books and most published writing endure rounds of editing that can alter the rawness of an argument. Le Corbusier, a pioneer of modern design and prolific writer who lectured with conviction about rethinking the crowded urban environment, frequently appealed to his audience with a vulnerable yet authoritative tone that cannot be felt solely from reading his body of written work.

So it is interesting and rather ironic that a book, The Rhetoric of Modernism: Le Corbusier as a Lecturer by Tim Benton (Amazon: US

|DE) addresses the gap between the great architect’s published works and ‘Le Corbusier in action’. Through his research, Benton exposes thoughts and emotional appeals that Le Corbusier would have modified or toned down from his lectures for inclusion in books or journal. In his detailed and close reading of the ways in which the famous architect connected and communicated with his audience, Benton reminds us that Le Corbusier’s zeal for the avant-garde and his penchant for publishing and lecturing factor into his significance in architectural history as much (if not more than) his built architecture. 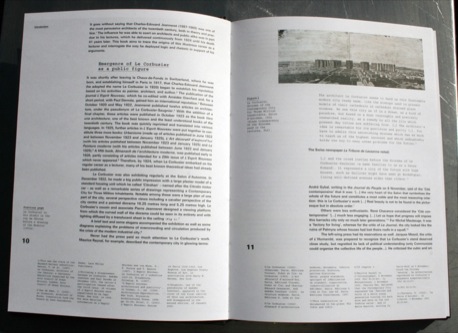 In the book’s four chapters, Benton traces the logic of Le Corbusier’s lecture technique, explains the origins, similarities and differences of his architecture and urbanism lectures and discusses a series of ten talks given in Buenos Aires in 1929. An appendix with a collection of notes, sketches and revised lecture transcripts follows. 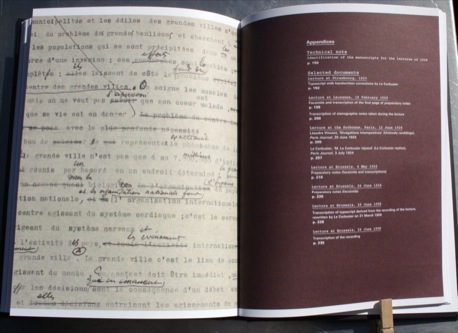 Through drawing, Le Corbusier demonstrated on-the-spot artistic skills to bolster his orations and underscore his credibility as an architect. Benton succeeds in linking reproductions of the sketches to the arguments delivered by the architect; glancing back and forth from text to the image, the reader can get a sense of the spoken aspect of the lecture while seeing the things that Le Corbusier would draw. 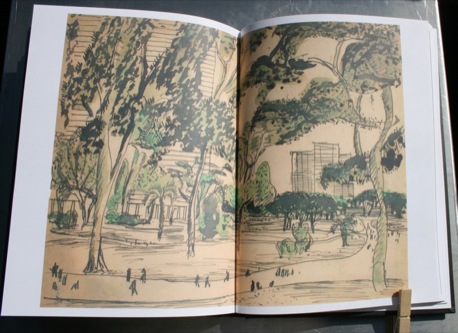 Of the hundreds of books produced about Le Corbusier, The Rhetoric of Modernism’s clear focus makes it a more valuable contribution to the scholarship than yet another book about Corbusian master plans. The book’s production values, design and materials also convey the research in a way that calls attention to the quality of the medium; the heavy matte paper feels like pages from a sketchbook and re-emphasizes the humble origins of the Le Corbusier’s great lectures. The shape, weight and layout also call to the mind the instructive nature of textbooks. 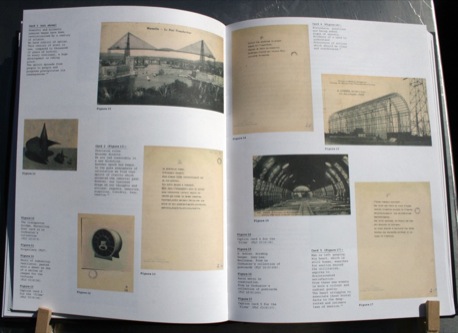 While the layout appears rigidly defined in some spreads, with neatly aligned text, dramatic margins and footnotes, it also morphs at times, defying the rules it has set for itself.

The quality and richness of the images is striking. The inclusion of incredibly detailed reproductions of Le Corbusier’s notes guarantees that a significant (yet welcome) part of reading the book will involve deciphering the mad scribbles of a genius. For those who do not read French or who for those who, despite repeated attempts, cannot read Le Corbusier’s handwriting, Benton provides translations. 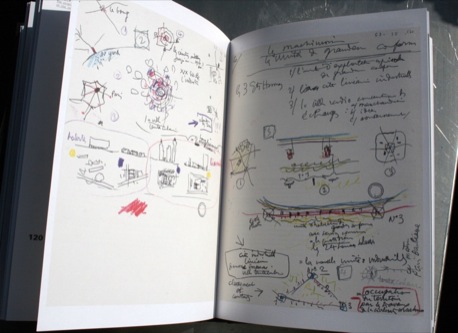 In the book, Le Corbusier’s work speaks for itself; the amount of primary source material equals the amount of Benton’s writing. Throughout the text, Benton sets up excerpts from interviews and lecture transcripts and interjects with the findings of his research. Through the use of different fonts, the book designers, Marine Gille and Line Martin-CÃ©lo, have found a way to clearly delineate Benton’s writing from his source’s words. 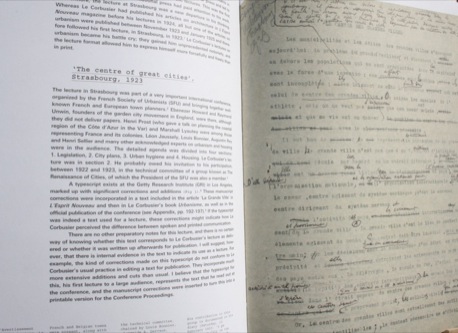 The well researched and rich writing requires a heightened level of attention that can, at times, impede the flow of reading and complete appreciation of the book requires existing familiarity with some of Le Corbusier’s projects. The Rhetoric of Modernism isn’t the best introduction to Le Corbusier, but it is a must-read for students and teachers of architecture. Presenting ideas verbally can be more forceful, emotional, free and ultimately more successful than imparting theories via printed matter.

Considering the number of boring lectures I’ve attended over the years, I see this book as much needed ‘how-to’ manual. Benton’s book is an invaluable tool for understanding how the greatest architect of the twentieth century disseminated his ideas, and a useful glimpse into the art of lecturing.

The Rhetoric of Modernism: Le Corbusier as a Lecturer by Tim Benton is published by BirkhÃ¤user and is available via Amazon (US

Becky Quintal is a student in the School of Visual Arts Design Criticism program. She has an undergraduate degree in architecture from Princeton University. She can be found tweeting at @beckq.

« Imposters A Practical Guide to Designing for the Web »