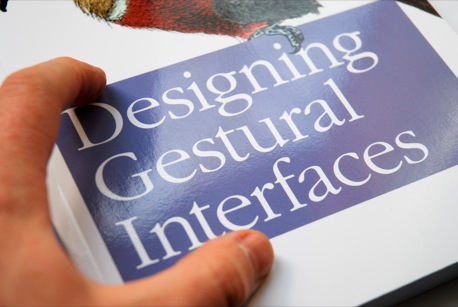 Dan Saffer has a knack for writing the right book at the right time. His first book, Designing for Interaction: Creating Smart Applications and Clever Devices

pulled together various disparate approaches and aspects to interaction design into one volume.

“In general, the response has been positive and it is being used by universities and others to teach new interaction designers. But now, four years after I started writing it, I’m mostly unhappy with it. It’s too theoretical and not useful enough to practicing designers,” Saffer told me.

I also use Designing for Interaction for teaching having found its format one of the clearest explanations of interaction design and it’s practical enough, I think. So I have been looking forward to reading Saffer’s new book, Designing Gestural Interfaces

, and I am happy to say that it is not a disappointment, though it has quite a different tone.

Published by O’Reilly, the Designing Gestural Interfaces is a much more practical book, filled with design patterns for gestural interface design as well as an appendix for possible future gestures. Starting with a potted history of gestural interfaces (one that goes back a surprisingly long way), Saffer moves onto what is good and bad about them as well as their ergonomics. This includes a whole section on the body, its main joint types, how they move and how the body and technology are so entwined:

“It’s no exaggeration to state that the type of sensor you employ entirely determines the types of gestural interactions that are possible. If the system can’t detect what a user is doing, those gestures might as well not be happening. I can wave at my laptop as much as I want, but if it doesn’t have any way to detect my motion, I simply look like an idiot.”

The exciting, but tricky, aspect of gestural interfaces for interaction designers is that the interface feels like it disappears. When you are pinching a picture taken with your iPhone camera in order to zoom or shrink it, it feels like there is no interface because you are directly manipulating the object, one that has never had a physical counterpart.

Of course that’s not entirely true - the metaphor of it being a photograph on paper is still there, as is the pinching. “As our devices get more sophisticated, metaphor will become even more important. I mean, look at your example. The user isn’t ‘pinching’ anything, just bringing their fingers together but we think of it as pinching to understand what is going on,” says Saffer. 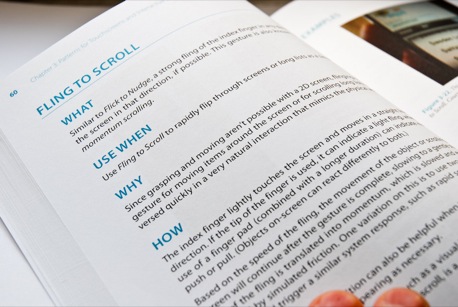 The middle part of the book is a combination of design patterns and a round-up of what kinds of gestural interactions are already. There is also a chapter on approaches to working on projects, including the sometimes difficult nature of wireframing and documenting gestures – everything from dance step notation to musical scores are possible approaches.

Despite the inevitable media focus on the technologies involved, Saffer does a good job of constantly bringing the focus back to designing for people:

The first question that anyone designing a gestural interface should ask is: should this even be a gestural interface? Simply because we can now do interactive gestures doesn’t mean they are appropriate for every situation. As Bill Buxton notes, when it comes to technology, everything is best for something and worse for something else, and interactive gestures are no exception.

In my interview with Saffer on Core77, Saffer told me he worries that manufacturers will go multi-touch crazy and what this might mean for the end user experience:

“There’s a lot of experimentation going on and it’s an exciting time, much like the web circa 1995-97, which, in one sense, is great. I can also see that experimental period becoming annoying for users who just expect their devices to work as they expect. We’re still figuring out what this stuff is good for and it’s going to take a while, perhaps a long while, before we figure out the things it’s really best at. We’ve only just begun.”

The last quarter of Designing Gestural Interfaces is where Saffer takes a plunge into predicting some future trends and has put together an appendix of existing and potential gestural interactions. 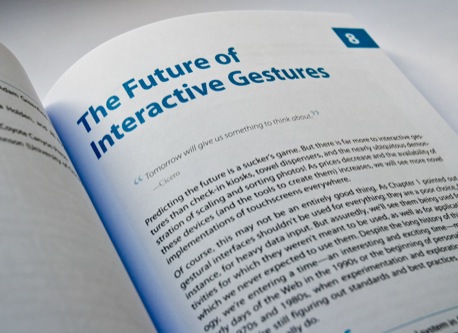 He is relatively cautious about the future predictions and there is nothing there that is likely to come back and haunt him (apart from the robots, maybe). Smart objects, near-field communication between devices as well as the ethics of gestural interaction all feature. Of course gestural interaction standards are also an issue he covers and one that is fraught with danger if companies too aggressively use or abuse the patent system.

In some ways Designing Gestural Interfaces is a book that is long overdue, given the long history of gestural interaction. In others it is a first and valiant stab and pinning down a currently emerging and rapidly changing area. My guess is that within three or four years, he will already need to update it, but for designers working both in interaction and product or industrial design right now, this is a must-read. If you have anything to do with designing any kind of consumer electronics device, you should get a copy of Designing Gestural Interfaces and get a second copy to give to the marketing department who will, no doubt, be trying to stuff multitouch interfaces on everything.